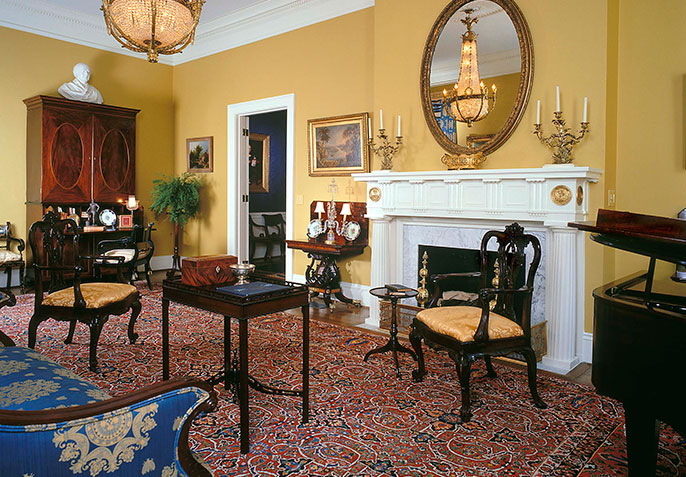 Large Drawing Room
The original use of the Large Drawing Room was that of entertaining guests at the Mansion. The Large Drawing Room, or the “Gentlemen’s Parlor,” was generally used by the men to smoke, drink, and talk about politics while apart from the ladies. The room has also been host to four weddings among Governor’s families throughout the Mansion’s history. In this room is a portrait of South Carolina’s own, U.S. President Andrew Jackson. Previously used for entertainment, and played by Leonard Bernstein, is a Steinway Grand Piano.

The mantel in the room was designed by Mrs. Burnet R. Maybank, former First Lady of South Carolina (1939-1941), and is made from trees cut from the state farm. The State seal is carved on each end.  Covered by many years of paint, they were discovered by Mrs. Donald S. Russell and detailed in gold relief during the redecorating of the Mansion in 1964.
Well-known cabinet-maker, Ephraim Haines of Philadelphia, designed the Sheraton-style sofa around 1810 and it was donated to the mansion in 1978, during the administration of Governor James B. Edwards.

On the back of one of the reproduction Regency arm chairs is a plaque that states U.S. President Gerald R. Ford sat in the chair on October 23, 1976.