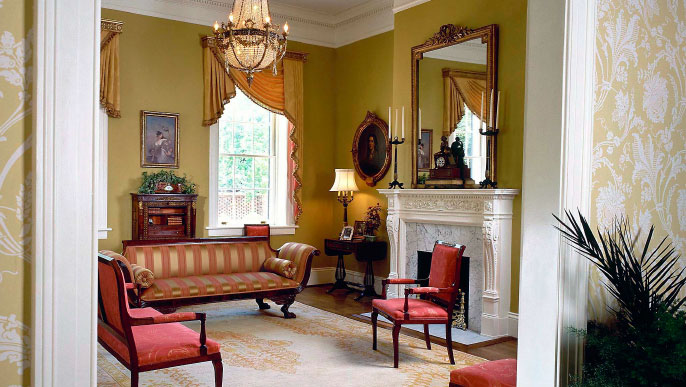 Small Drawing Room
The Small Drawing Room, used to entertain guests, is often referred to as the “Ladies’ Parlor.” Similar to the “Gentlemen’s Parlor,” the Small Drawing Room was a haven for the ladies and is adorned with portraits of South Carolina women including Ann Pamela Cuningham, founder of Mount Vernon’s Ladies’ Society, and Angelica Singleton Van Buren, who married the son of U.S. President Martin Van Buren and became the President’s official hostess in the White House. Pastels by Henrietta Deering Johnston of Ireland, America’s first pastel artist, depict Mrs. Robert Brewton and Mrs. Charles Pinckney. The Empire Mahogany sofa was made in 1820 in America and it once belonged to the family of Archibald Rutledge (1883-1973), Poet Laureate of South Carolina from 1934 until his death.  Rutledge was a descendant of Chief Justice Charles Pinckney and Eliza Lucas.